PADIC is a Parallel Arabic DIalect Corpus PADIC is composed of about 6400 sentences of dialects from both the Maghreb and the Middle-East. Each dialect has been aligned with Modern Standard Arabic (MSA). PADIC includes four dialects from Maghreb: two from Algeria, one from Tunisia, one from Morocco and two dialects from the Middle- East (Syria and Palestine). PADIC has been built from scratch by the members of SMarT research: Salima Harrat, Karima Meftouh and K. Smaïli and with the participation of M. Abbas. The translation of Tunisian has been done by Salma Jamoussi, Moroccan by Samia Haddouchi, Palestinian by Motaz Saad and Syrian by Charif Alchieekh Haydar.

Note that in the first version of PADIC and in this last paper, the Moroccan dialect was not available and not mentioned. Two Moroccan from Casablanca and Rabat included the Moroccan part. Consequently, we recommend you to reference the above article.

CALYOU is a Comparable Spoken Algerian Corpus Harvested from YouTube

We developed an approach based on word embedding  that permits to align the best comment written in Algerian dialect with a comment written in Latin script. That means that an Arabic dialect sentence could be aligned with French or Arabizi sentence. A sample is given below. 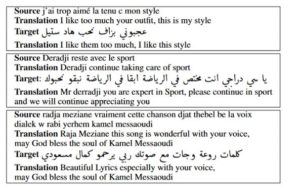 This resource gathers the words with their different writing possibilities (orthographic variability). This variability is the main characteristic of the Arabic dialects especially those used in social networks. The orthographic variability is due to the lack of standardization of writing, the use of Arabizi (writing Arabic words with Latin characters) and the lack of grammatical rules for the dialects. The lexicon was built automatically using word embedding approach. Each entry is composed by a word and its different writing forms. This resource can be very useful in many applications of natural language processing. Some examples of the dictionary entries are given below.

Voice conversion is an important problem in audio signal processing. The goal of voice conversion consists in transforming the speech signal of a source speaker in such a way that that it sounds as if it had been uttered by a target speaker while preserving the same linguistic content of the source original signal. We propose a novel methodology for designing the relationship between two sets of spectral envelopes. Our systems perform by: 1) cascading Deep Neural Networks and Gaussian Mixture Model to construct DNN-GMM and GMM-DNN-GMM predictors in order to find a global mapping relationship between the cepstral vocal tract vectors of the two speakers; 2) using a new spectral synthesis process with excitation and phase extracted from the target training space encoded as a KD-tree. We present in this demo samples of voice conversion outputs from male and female source speakers. 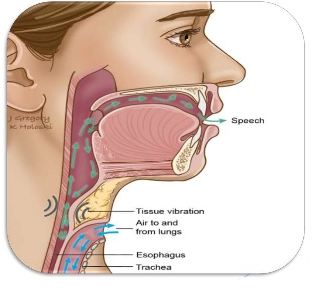 The method adopted in this paper for enhancing esophageal voice consists in using a combination of a voice conversion technique and a time dilation algorithm. The proposed system extracts and separates excitation and vocal tract parameters using a speech parameterization process (Fourier cepstra). Next, a Deep Neural Network DNN is used as a nonlinear mapping function for vocal tract vector transformation, and then the converted vectors are used to determine a realistic excitation and phase from the target training space using a frame selection algorithm. However, in order to preserve laryngectomees speaker identity we use the source vocal tract features and propose to apply on them a time dilation algorithm to reduce the unpleasant esophageal noises. Finally the converted speech is resynthesized using the dilated source vocal tract parameters and the predicted excitation and phase. An experimental comparison study has been realized for reviewing the changes in speech quality and intelligibility of the different enhanced samples obtained. Experimental results demonstrate that the proposed method yields great improvements in intelligibility and naturalness of the converted esophageal stimuli. Results of voice conversion evaluated using objective and subjective experiments, validate the proposed approach. Table below exhibits some examples obtained by the proposed Voice Enhancement Technology. The “Source Speech” column indicates examples of utterances pronounced by two laryngectomees. The next four columns, “GMM”, “DNN”, “DNN_Src” and “DNN_Srcdilated” concern the resynthesized results using our Voice conversion technology.
AMIS Project for video summary generation
In this section, it is provided an example of the performance of the AMIS system. On the left, there is an original video got from the news. On the right, there is the resume video produced by the system.

TRAM: Translating Arab Music
In the context of Arab maqamic music, mawwāl is a non-metric vocal improvisation and is often applied to narrative poetry. Upon the completion of each vocal sentence in the mawwāl, the instrumentalist performs a recapitulation, or a translation of the vocal sentence. This musical submission features the new and improved version of the mawaweel computer application for automatic accompaniment to mawwāl. The application provides real-time instrumental translations to vocal sentence, and is primarily based on machine learning. To train our model, and due to technical reasons, we constructed our own parallel corpus. Because of the high expenses and great effort required for this, our corpus was small and consisted of only 4,041 vocal phrases and their corresponding melodic instrumental responses, or translations. Having such a very small corpus made it suitable to treat it the same as corpora of under-resourced languages were treated, and accordingly to apply statistical machine translation rather than neural machine translation. “Andalusian Fragrance” is a mawwāl narrating poetry excerpts from the dramatic love story of two very famous poets and lovers in Andalusia: Ibn Zaydún and Wallada. Throughout this artwork, the improviser Muhannad Alkhateeb used elaborative expressiveness, maqam modulation and choice of register all to convey the deep and diverse feelings expressed in the poetry, such as: passion, doubt, anger, sorrow and hope. The computer successfully stood as a peer while translating the creative vocal sentences. As this was a studio recordings, we had the privilege of recording several takes and selecting the best ones from two perspectives: vocal and instrumental. We then applied slight reverb, EQ, and compression. However, the model is robust for live performances. This Artwork was presented in NIPS 2018 Creativity Art Gallery (Machine Learning for Creativity and Design).